Around Wales B-Roads and Byways by Jamie Owen 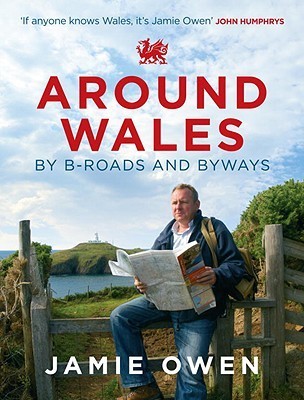 Beginning at Poppit Sands, Jamie travels through St Dogmaels, Moylgrove and Newport before reaching the picturesque lighthouse of Strumble Head. After a brief foray to experience the sights and sounds of Cardiff, Jamie delves into the neighbouring countryside, exploring St Hilarys church and two castles before arriving in the coastal town of Llantwit Major.

This is the land that time forgot, off the tourist trail and lost in a world you thought had passed.Further north, the Menai Strait is followed by a trip to a town with one of the longest placenames in the world, locally shortened to Llanfair PG, itself followed by Llandudno, that proud and haughty Victorian seaside town. Jamie marvels at the artwork of Rex Whistler at Plas Newydd before ascending the Marquess of Angleseys Column and taking in the Italianate architecture of Portmeirion - that fantasy village captured on camera in The Prisoner.The vast expanse of the national park beckons next, with a few days spent climbing in Snowdonia to witness the difficult marriage of farming and millions of tourists being played out beneath the highest mountain in England and Wales.With detours to the most beautiful places in Wales, and with stunning photography throughout, this book takes readers on a fascinating journey and adds up to an unashamed celebration of Wales written by someone who loves it from the inside.

Comments
Comments for "Around Wales":